My first telescope was junk, bought mail order and a real case of buyer beware. But then I was only 10. Since then I’ve had more luck and that’s because I research before buying. So if you are starting out, or want to buy a present for someone, read on. We stage lots of star parties and people often bring along their £50 Argos or National Geographic telescope. Then they blame themselves because they can’t use it properly.  Don’t. Most of these scopes are poor quality and will only end up discouraging you. Remember when you magnify an image – the purpose of a telescope – you magnify vibrations too, so whatever your scope is mounted on needs to be reasonably stable. And also don’t forget that looking through a telescope can be like viewing through a straw. Good scopes have little so called red dot finders or mini-finder scopes attached with a wider field of view, allowing you to sight the target through these first. All you need to do is align it with the main scope – best done during the daytime – and bingo. Don’t skip getting your finder aligned. Otherwise you will be lost in space.

The power of a telescope is not measured by stated claims of ‘magnification’.  It is determined by aperture – how much light the scope gathers.  In practice a good telescope with say a 80mm lens is good for a max of about 130x – there’s only so much you can do with a limited amount of light.  Bigger scopes offer a higher resolution image at the cost of expense and bulkiness.  Everything is a trade off.  If in doubt prioritise portability.

Telescopes are only as good as the mount and tripod you use.  Put a good telescope on a shaky mount and it’s a recipe for disappointment.

Telescopes broadly fit into one of three categories.

Refractors use a lens at the front of the tube to gather light and you look through the back.  This is the oldest type of scope and the one most people are familiar with.  You may see refractors labelled as Apochromatic/ED – these are a bit more expensive as they use glass which is better colour corrected and take more magnification.

Reflectors use a mirror at the bottom of the tub to collect light and you look through the eyepiece at the top and to the side.

Hybrids (catadioptric) are much more compact designs that incorporates elements of both the above.  The most popular of them is the Schmidt Cassegrain, followed by the Maksutov Cassegrain.

Before you read the suggestions below on telescopes ponder on the thought that binoculars may be a better starting point.  If so 10 x 50 or 7 x 50 models are the ones to go for.  The first number is the magnification and the second is the diameter of the lens.  The Opticron Adventurer 10×50 T WP (below) Binoculars are good and cost around £85. What will they show?  Our nearest galaxy (Andromeda), craters on the moon, the moons of Jupiter and scores of large star cluster.   Here’s an excellent resource in choosing the right binos: www.binocularsky.com

Beginners and others wanting a good portable scope.  The Skywatcher 102 StarTravel refractor (£209), below, is very usable.  Easy to carry, store and transport and gives nice wide field views of objects like big star clusters and, under dark skies, the Andromeda galaxy. You can put the tube on a wide variety of mounts, but by far the best choice is a simple up-down, left-right one called an alt-az. The cheapest option is to buy it with a so called AZ3 mount (£249).  This will do to get you started, but the motions are not the smoothest.  An alternative (but more expensive) is the one illustrated below – an AZ5 (made by Skywatcher) and the whole package with the telescope itself is £409. It comes with all you need to get observing and the mount can also be use with other tubes in the future.

The tripod is a bit of a weak link, but it can be replaced at some point with a more rigid, but still fairly lightweight metal model. And as you get to know the telescope you may want to improve some of the other accessories too. The star diagonal (seen above at the back of the telescope) bends the light path 90 degrees so viewing is more comfortable.  It’s ok to start with, but there are better quality ones available for about £50.   Another eyepiece is perhaps the best upgrade.  The ones bundled with the scope offer a narrow field of view so think about getting a better quality one. A good budget option is the BST StarGuider 18mm ED Eyepiece. This is the easiest way to transform the visual experience and costs just £45.

A cheaper alternative telescope on the same mount, but of a different design called a reflector, is the Sky-Watcher Explorer-130PS AZ5 Deluxe.  It uses a mirror to collect the light, rather than a lens and the eyepiece (which you look through) is located at the top of the tube.  Priced at £415 performance is similar to the StarTravel 102, offering a tad more detail on some objects. 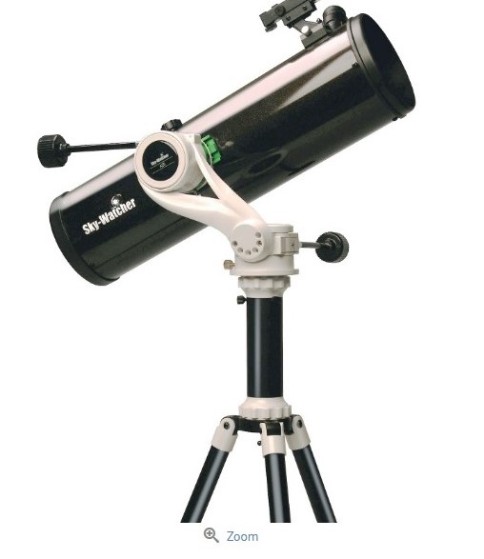 These scope-mount combinations are all easy to use and you will be viewing in seconds under a clear sky.  No fuss, no problem.

Note of caution. Many beginner telescopes (including the 130P tube directly above) often come on the kind of mount shown below.  This design is known as a German equatorial (GEM) and it is generally best used for astrophotography. But cheaper versions like this (sometimes called an EQ1) are useless for that, hard to use, shaky and generally a pain in the neck. Avoid them if possible (you will soon dream of owning an an Alt Az mount instead!). 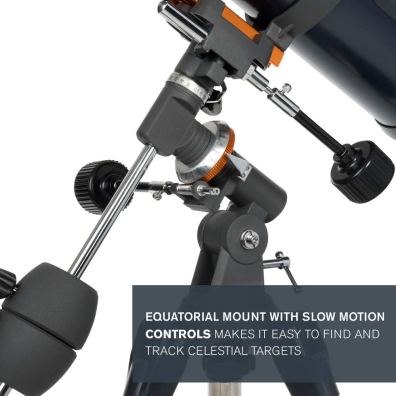 Want something flashier?   Then try the Skywatcher 127 SynScan – £499. Once set-up correctly it will  slew automatically to objects, but you will need to be able to identify a couple of bright stars to align on.  With almost five inch of aperture it will show you plenty – rings of Saturn, good views of the moon and Jupiter, along with globular and star clusters. Extremely portable, the slight downside is it has a rather narrow field of view.  I have a version of this tube on Skywatcher’s AZ GTi mount (£547, see below) and it’s a great little set up, especially from light polluted locations. It uses either a 12 volt power pack, or eight AA batteries (good quality rechargeable ones advised).  You use your mobile phone to control the scope with a free app and it works well.  Your phone can also take pictures of the moon through the scope, but you’ll need a steady hand.  Again, the tripod is a bit of a weak link, but as stated above, can be readily upgraded to something more stable. 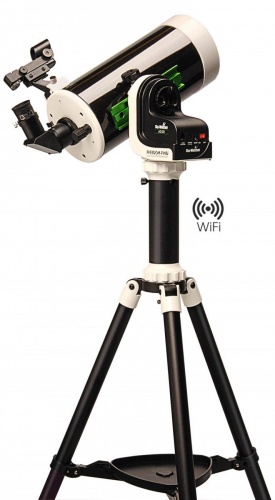 You want a bigger scope that will show you more, but at the moment just want to look rather take pictures.

Try the StellaLyra 200mm Dobsonian telescope (£449) – basically you push and pull so very simple to use. Doesn’t track the stars so you move it manually. It has a good light grasp so you see more detail in objects. But you’ll need to learn to collimate it – ensuring optical alignment – which is a bit fiddly at first. A tad bulky (see below), but a powerful package, especially under a dark sky. See http://www.firstlightoptics.com/stellalyra-telescopes/stellalyra-8-f6-dobsonian.html

You want to take pictures with your digital DSLR and need a good mount and telescope package, but have not won the lottery.

At this point you need to head to your local astronomy club, or sign up and spend a few nights at a good UK star party, like Kielder (March and October) You can waste an awful lot of money at this point and advice is essential. Astrophotography can be as simple as pointing your camera at the sky and leaving the shutter open. Or you can spend thousands of pounds!  Whatever you do, deal with a reputable astronomy shop. Ones that I’ve used and which will offer you friendly advice include:

There is also a thriving second hand market where items can be bought for 60% of their new cost.  Keep an eye on http://www.astrobuysell.com/uk   You will have to be patient to find what you want. Ebay is probably best avoided.

NOTE: Because of COVID, Brexit and now Sterling’s weakness the  price of astronomy equipment has risen by as much as 25% over the past couple of years.  I’ve amended the details on this page accordingly.

Meanwhile here’s a guide to simple astrophotography to put you in the picture.

Andromeda Galaxy photographed with a small telescope and Canon DSLR camera from North Yorkshire. You can do this too, but take advice to avoid expensive mistakes.